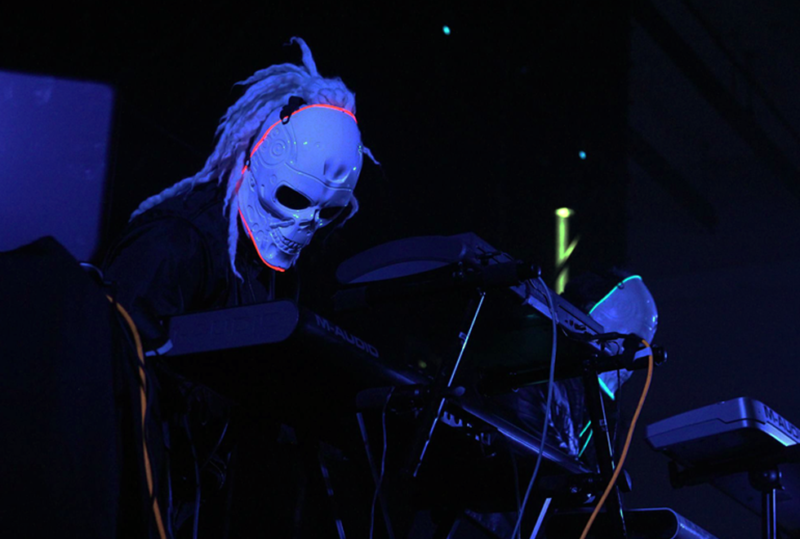 In a bold move, Sean Young (Executive Director of Electronic Earth), has collaborated with a very significant name in entertainment.

Young’s flagship project, Precipice (written/directed by Young and starring Georgia Hunter), now has an original score written by Les Elston (Lab4) and Young. Elston (Lab4) has an extensive award-winning history of international success, and an impressive library of albums/EPs and singles.

Not getting ahead of ourselves, we wanted to know how this collaboration came about. We were fortunate enough to have Les Elston from Lab4, and Sean Young, to comment on when this (as the media has started to call it) ‘bromance’ started.

Les:
Bromance .. (laughs).
Well the creative ‘bromance’ began, or was first mentioned late 2017 I think it was? The deadline for the music wasn’t until May but I wanted to get things moving on it as soon as I could.
Sean had asked me if I would be interested in collaborating with him to write a piece of music for his upcoming movie Precipice.. It just so happened at the time I was putting the finishing touches to the new Lab4 Ep which is. also now titled CTRL ALT DESTROY after the title of the score we wrote… I had just one last track to write for the EP and thought it would be a really good idea to somehow fuse the two projects together - so, the score that was written for Precipice also became the title track of the EP, or to be more precise – a version of it.

Sean:
My relationship with Lab4 stems back to the late ‘90s when they were first starting to tour in Canada. At the time, I was a DJ (SERIAL SEAN) and events promoter. I attended one of their live shows and as a result started purchasing their tracks on vinyl (shipping from the UK) to play at gigs which were always floor destroyers. I made sure to communicate the audience feedback I was receiving back to them, developing a relationship through online correspondence until 2004 when Lab4 returned to Canada to headline at that summer’s WEMF (World Electronic Music Festival) which was the dual 10 year anniversary of the festival and of Lab4.
We’d arranged to meet backstage after their performance, so I’d brought some of their Lab4 vinyl to autograph and we started a great conversation during that initial meeting that’s continued all of the way to today.
As they say, the rest is history.

E2:
Lab4 are based in the UK and Electronic Earth is in Canada. Did you encounter any problems because of the distance?

Les:
No, none whatsoever. I have to work on projects from all over the place, it’s no different for me than working on a project with someone who lives two miles away.
Most of my writing involves collaborating with vocalists .. the two I work with most, Laura Jenkins and Vicky Jackson are both from the UK and it was just as unproblematic.

Sean:
The internet has allowed creative professionals a much broader collaborative pool to pull from. In some ways it can create problems by having too much selection, but when you already know what you are trying to accomplish, and with whom, it allows for a much easier workflow when you can just open up your web browser and dial up anyone in the world.

E2:
Les, what was it like to work with Sean Young, the creator/director of Precipice?

Les:
Incredibly easy, I think when you have two or more creatives who both share the same influences, it makes the whole process flow better. One of the most important things is having accurate reference tracks to at least get a seed of an idea going in. Sean sent five or six reference tracks which very much helped. 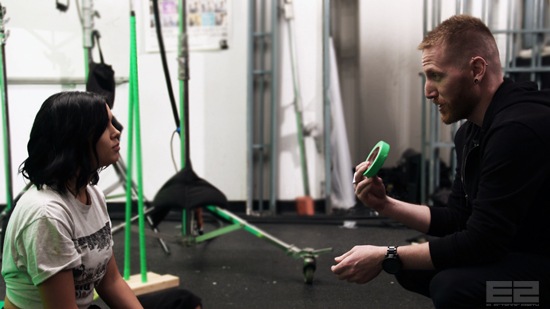 Sean:
I was a little obnoxious that way. I had wondered if I had provided too much reference. I’d sent him 6 completely different sounding tracks from other films and music compositions, identifying what I liked from each of them and Les just nailed it. His first go was spot on what I was hoping for and we only went through a few technical and timing revisions before hitting it out of the ballpark.

E2:
Initially, the intro track wasn’t to appear on the forthcoming Lab4 EP CTRL ALT DESTROY, what made you want to include it on the release?

Les:
It makes sense really for Social Media and cross appeal. If you have a track featured on a film or advert then the outreach is a lot better than just one platform. 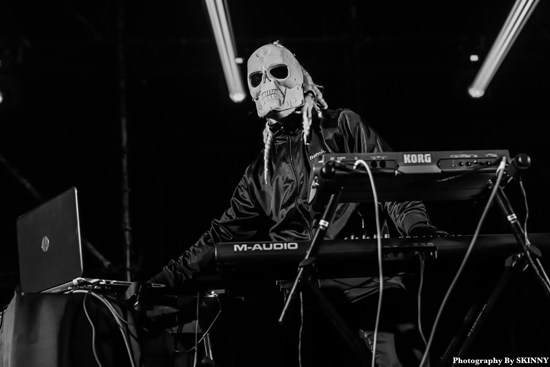 Sean:
Exactly what Les said. Initially, when he told me about the EP, I had wondered if we’d do anything with the score once it was done – like release a single or include it on a Lab4 release in the future. When Les asked what I thought about making it the intro and title track to the EP there wasn’t any other response to be had – it’s a smart move promotionally and for both entities involved to cast as wide a net as possible.
The timing was perfect.

E2:
Are there any plans for the CTRL ALT DESTROY intro track in the future?

Les:
Yes I’ve already written a hard dance version which I included in the Lab4 live set for the EP launch event that was on the 23rd of June in London (UK). In addition to that I’ve gotten a friend of ours who’s a very well known DJ in Japan to remix it for a single release. 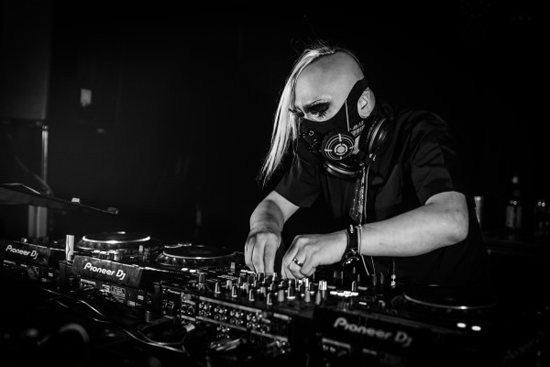 Sean:
Yoji Biomehanika, through arrangement with Les, has agreed to do an additional remix of CTRL ALT DESTROY (the score from Precipice and the intro track for Lab4’s new EP), and a release is tentatively planned for this September. In what form is up in the air at the moment, but all parties involved are very excited.

E2:
Les, how does soundtrack work differ for you from your regular musical writing?

Les:
I love sound to picture. Adam (the second member of Lab4) and myself have worked on numerous adverts for some of the biggest clients in the world of advertising – Satchi’s, Gray’s of New York, Heater, DMB&B to name a few.
Writing music is great, but when you see it in put in context to a film or advert, it makes it almost come to life. You can never listen to that piece of music again without seeing the advert or film in your mind’s eye, so to speak.

E2:
Would you work with Sean Young or Electronic Earth again in the future?

Sean:
(Laughing) .. work with Les again? No way. But in all seriousness – absolutely. I’d be completely onboard with Les and Lab4 working on more of Precipice when the project pushes past the initial film or other projects with us that fit into their creative realm. 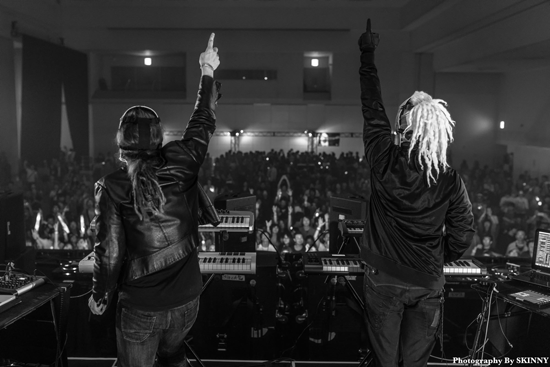 E2:
Les, you also decided to include a rework of one of Lab4’s earlier tracks on the EP. With such an extensive number of quality tracks to pick from within the Lab4 back catalogue, what made you pick ‘Mind Control‘ to rework on CTRL ALT DESTROY?

Les:
Well .. to be honest many of those early Lab4 tracks are very hard to re-create .. due to that fact that the original equipment was either broken or sold.
The first album was written on a Korg M1 Midi’d up to a Juno and a Casio sampler.. all of which have long gone. ‘Mind Control’ was the first because I love the sample and I wanted to do something different with it.
To be precise, ‘I Need Your Love’ was the first one to be rewritten, but we gave that away as a free tune to the Japanese Tsunami charity fund on the proviso that its only available on that CD which was mixed by Yoji Biomehanika.

Sean:
It’s a great rework too, lots of changes while maintaining the feel of the original. The whole EP is a stellar piece of work, and I’m so proud of what we’ve done together.

Precipice is presently undergoing its final days in post-production and will screen at select film festivals before undergoing development to be presented as serialized content for television and/or streaming services.

CTRL ALT DESTROY is out now via Hard Trance Europe (distributed by Black Hole Distribution) and features a version of the score from Precipice, Sean Young’s directorial debut – click here to get your copy today.